No Drips, No Drops: A City Of 10 Million Is Running Out Of Water

26 Jun No Drips, No Drops: A City Of 10 Million Is Running Out Of Water

Posted at 18:48h in News by WorldWater 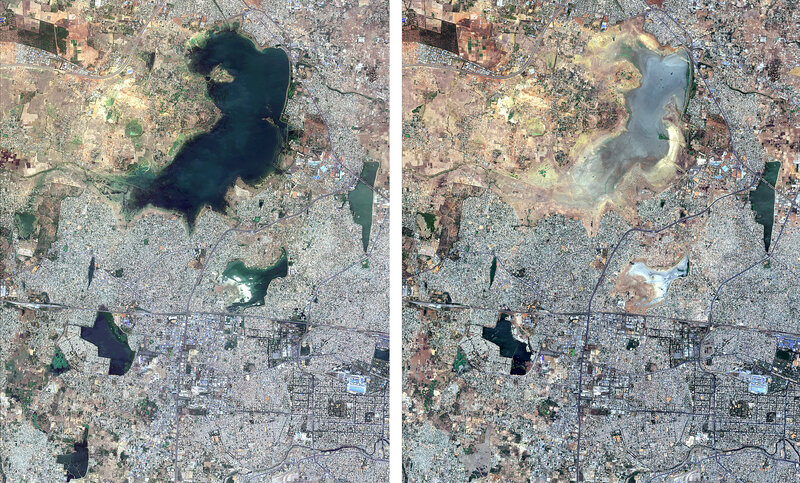 In India’s sixth-largest city, lines for water snake around city blocks, restaurants are turning away customers and a man was killed in a brawl over water. Chennai, with a population of almost 10 million, is nearly out of water.

In much of India, municipal water, drawn from reservoirs or groundwater, typically runs for only a couple of hours each day. That’s the norm year-round. The affluent fill tanks on their roofs; the poor fill jerrycans and buckets.

But in Chennai this summer, the water is barely flowing at all. The government has dispatched water tankers to residential areas to fill the void. Still, some people in especially hard-hit areas have vacated their homes and moved in with relatives or friends.

Satellite images of the city’s largest reservoir, Puzhal Lake, taken one year apart, reveal a chilling picture. Since June 2018, the lake has shrunk significantly. Puzhal is one of the four rain-fed reservoirs that supply water to most parts of Chennai.

Another picture shows the parched bed of Chembarambakkam Lake, another major reservoir. Its cracked surface is covered with dead fish.

“It’s shocking but not surprising,” says Tarun Gopalakrishnan, a climate change expert at the New Delhi-based Centre for Science and Environment. He says the crisis in Chennai is the result of “a toxic mix of bad governance and climate change.”

Rains have become more erratic because of climate change. That, coupled with a delayed arrival of the seasonal monsoon, which usually comes in June, has all but dried up the city’s water supply. Government data show that the storage level in the four lakes combined is less than one-hundredth of what it was at this time last year. A severe heat wave gripping most of India, including Chennai, has aggravated conditions.

A 2018 government think tank report projected that 21 major Indian cities, including the capital, New Delhi, and India’s IT hub, Bengaluru, will “run out of groundwater as soon as 2020.” Approximately 100 million people would be affected, the report predicts.

In Chennai, residents are scrambling to conserve water.

“We stopped using showers for bathing. We use buckets so that we can ration the amount of water,” says 33-year-old university professor Nivash Shanmugkam. His family also avoids using a washing machine for its laundry and washes clothes by hand as much as possible.

Public institutions are suffering. Hospitals and nursing homes are charging more for services to cover the increased cost of water, according to the local press. There are also reports that toilets at schools are dirty due to a lack of water. 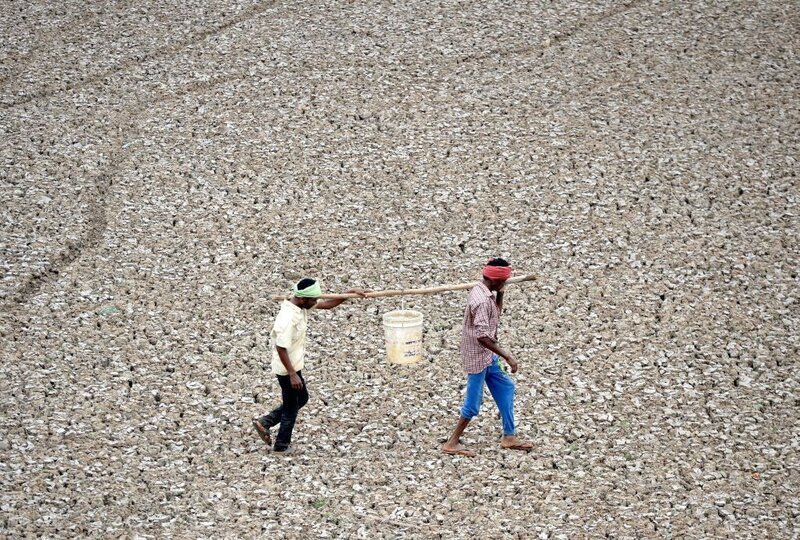 Indian workers carry the last bit of water from a small pond in the dried-out Puzhal reservoir on the outskirts of Chennai.

A scuffle over water turned deadly for a 33-year-old man when he tried to stop another man and his sons from siphoning large amounts of water from a public tank this month.

Businesses and offices have been affected too. Amit Agarwal, a 28-year-old IT professional in Chennai, has been working from home for the past few days because there is no water in the bathrooms in his office. Many tech companies have been advising employees to do the same.

In Chennai’s shopping malls, restrooms are operational only on some floors.

The response of the government of Tamil Nadu, the state whose capital is Chennai, has ranged from downplaying the extent of the crisis to praying to the rain gods.

“There has been a water shortage in several areas due to monsoon deficit. The government is taking several steps,” Tamil Nadu Chief Minister Edappadi Palaniswami told reporters on Friday.

Those steps include a special train that will soon begin transporting 10 million liters of water per day – that’s about 2.6 million gallons — to Chennai from another part of the state. After initially turning down donations, Tamil Nadu has accepted an offer of aid of 2 million liters of drinking water from a neighboring state, Kerala.

Opposition politicians in Tamil Nadu are staging protests. Dozens of women carrying colorful plastic water pots with slogans written on them gathered in Chennai this week to criticize the government for its handling of the water crisis.

One thing that could have possibly averted this acute water shortage? Rainwater harvesting.

In 2002, the government of Tamil Nadu passed legislation that mandated rainwater-harvesting structures on all buildings, including private homes, in the city. The goal: to capture rainwater and store it for later use. It was a revolutionary idea. When the city got hit with heavy monsoon rains a few years later, rainwater harvesting raised the water table enough to last the city until 2016, says Sekhar Raghavan, director of the Chennai-based nonprofit The Rain Centre.

But the government failed to monitor the rainwater-harvesting structures, which meant a lot of them didn’t work properly.

“This is a wake-up call for the government and citizens,” he says.

Raghavan says he’s now getting calls from people asking about how they can properly harvest every drop of rainwater.

“The fear associated with climate change is not the fear of knowing that everything is going to be worse,” says Gopalakrishnan. “It’s the fear of not knowing.”

While they may not necessarily light ceremonial fires for rain like their elected leaders, Chennai residents will nevertheless be praying for a downpour soon.