Posted at 15:32h in News by WorldWater

Harare, Zimbabwe — The more than 2 million residents of Zimbabwe’s capital and surrounding towns were without tap water on Tuesday after authorities shut down the city’s main treatment plant, raising new fears about disease after a recent cholera outbreak while the economy crumbles further. Officials in Harare have struggled to raise foreign currency to import water treatment chemicals; about $2.7 million is needed per month.

Meanwhile, water levels in polluted dams are dropping because of drought.

“Everyone living in Harare is affected, they don’t have water,” City Council spokesman Michael Chideme said Tuesday, as residents turned to options such as bottled water or wells.

Chideme called it a dangerous situation because of the risk of water-borne diseases. “Maybe the situation will be resolved by tomorrow but we are not sure,” he said.

The capital now frequently records cases of diseases such as typhoid due to water shortages and dilapidated sewer infrastructure. Some residents are forced to get water from shallow, unsafe wells and defecate in the open.

The Associated Press earlier this month watched some residents pump water then wait a half-hour for enough water to seep into the well to pump again. 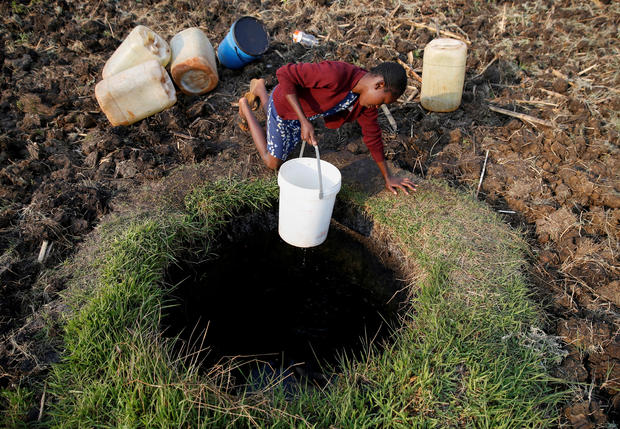 The country once was a bright spot in southern Africa and a regional breadbasket but the economy has collapsed in recent years, and foreign currency is hard to come by. Prices for many basic items continue to rise, and the public health care system falters as some doctors and others say they can hardly afford the commute to work.

As services largely collapse, many Harare residents in recent months have found themselves lining up at wells in the middle of the night for water or lighting their homes by candle or mobile phone.

The deepening frustrations have exploded more than once into protests that have swiftly been followed by sometimes violent government crackdowns.

The economic and social pressures follow Mnangagwa as he attends the annual United Nations gathering of world leaders this week.